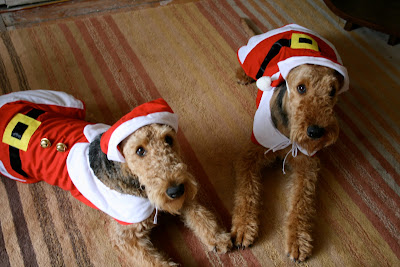 We are signing off for the year!

It's been an absolutely terrific year and we are glad to have met so many of you during its course and are proud to call you all friends now!

We've had plenty of adventures in 2009 and look forward to many more in 2010 and to share our stories with you.

As we are still busy being little Santas and preparing big sacks for our friends, we probably won't have enough time left to go around to you all individually but we wish you a terrific time over the next few days and hope that you will spend it with all that a dear to you in peace and harmony. We know, families can be a bit crazy, especially around this time of the year, but if you keep a cool schnoz and a long tongue (Pinkie says, it reliefs stress) it'll all be dandy.

To all of you who have snow at the moment, enjoy it! We are very jealous as we've never even seen the snow before. All your blog entries and pictures look amazing, like a true Winter Wonderland.

Instead, we have a gazillion degrees over here and we can't wait to get out of our Santa cozzies and jump back into the cooling ocean.

We'll touch base again in early Jan and will fill you in on our Dale xmas adventures.

Sending lots of Airelove around the world,

INKY (half asleep) and MOLLY (in charge) 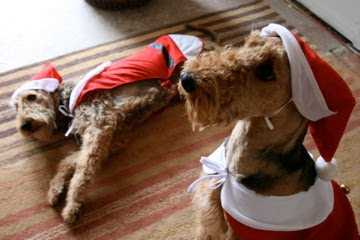 Check out what we've got in the mail... 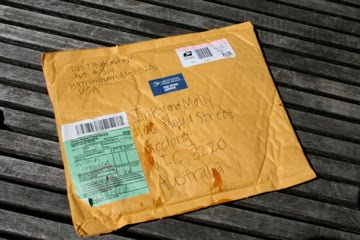 We were soooo excited, we nearly peed our fuzzpants. We opened it up and there was an envelope with pretty writing... 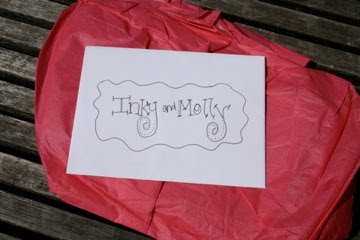 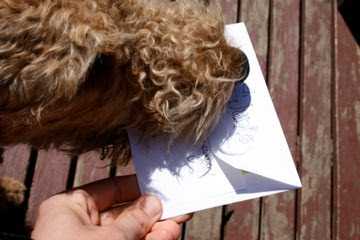 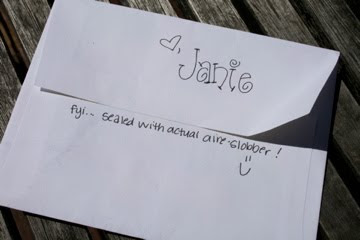 It's from our fuzzpants comrade Janie!!

The back says, "sealed with actual Aire-slobber". Now how very special is that?!!

Out came a beautiful card... 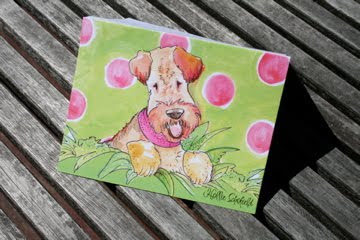 Janie's mama drew the picture for this card. She is so talented!!

Janie had lots of nice things to say on the card... 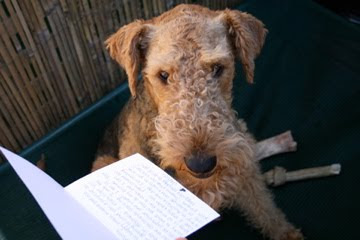 Then we opened the pressie that came along with the card. And look... 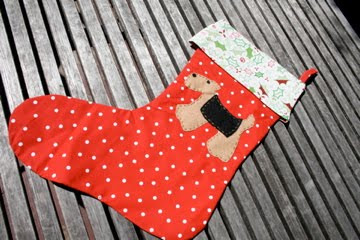 It's the stocking from Janie's give-away, also made by Janie's mum.
Because it's such a special piece of art, we gave it a special place in OUR house... 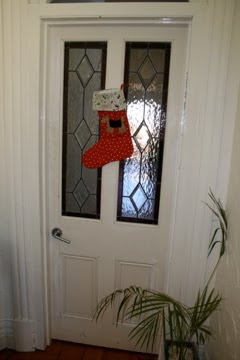 It now hangs on The Middle Door, also known as, The Halfway Door, and we hope it will be stuffed to the max by xmas Day (hint, hint, Pinkie).

Just a note on The Middle Door. It forms a seal between the front door/ reception area and the main living area. It basically divides the hallway in half.
Now, rumour has it that this door has been put their especially for us (how nice?!) as to protect us from anything or anyone coming through the front door (although pinkie would like to tell you that it might be the other way around). Since this door is "our" door now (with authentic, long and deep scratches that reinforce our ownership), we felt it was right to decorate it (more) with our things.

Thank you so very much Janie and Hollie. We love you long time!!

We sure needed one hell of a nap.

The last few weeks have been action packed to say the least. Lets see, we had Winnie aka the Wintah Dog stay with us for a week, 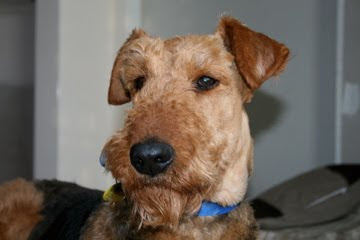 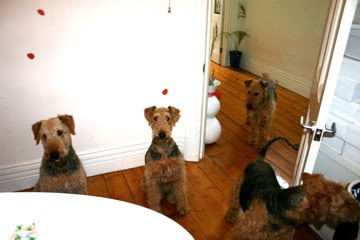 then we had our annual xmas picnic with the club 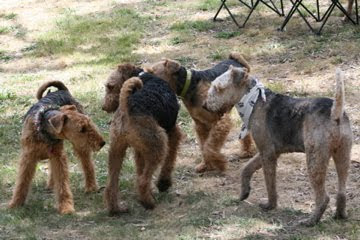 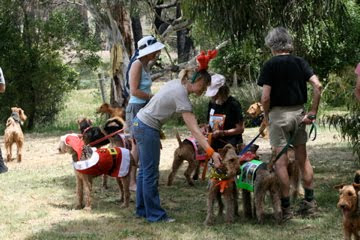 and last weekend we had Oscar, a new recruit, stay with us (photos of that adventure later).

Needless to say that we had numerous trips to the beach to entertain our guests and spent hours "mongreling-around" so to say we were exhausted would be a sheer understatement.

But boy, did we have some fun!

So back to our xmas party. We tried to head count, but gee it was hard, with so much black & tan flitzing around, it was just a blur most of the time.

There was 8 of us who traveled up from Geelong (about 2 hrs away from where the event was held in the beautiful Yarra Valley, at Dixon's Creek). When we got there, there was already a good presence of Aireheads in place, not to forget our hosts' own crew of 5, but by lunch time there was well over 30 Dales, we reckon they may have even been over 40! Pinkie was in heaven!

We love Bill & Sue's place, it's just perfect. There is heaps of room to roam around, they are near a national park so there is lots of wildlife to chase (yes!), and, get this, they have their own lake for us to swim in, get muddy feet and chase ducks! It truly is paradise over there! 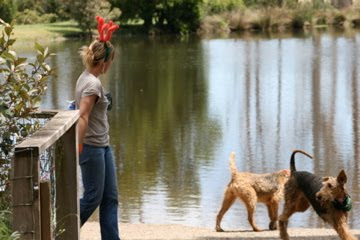 First on the agenda was a treasure hunt around the lake. Santa had been busy hanging treats and biscuits off the trees and, you've guessed, we had to find them and gorge ourselves. No hard task for us!

Then we had a good romp around before it was time for the dress up parade.
The hosts' crew of original 4 (although there is now 5 with Chili, another Rescue Dale), made an appearance as the Wombat Bend (name of the property) Pack and dressed as a pack of cards. How clever! They of course, well-deservingly, came first with that idea (biggify). 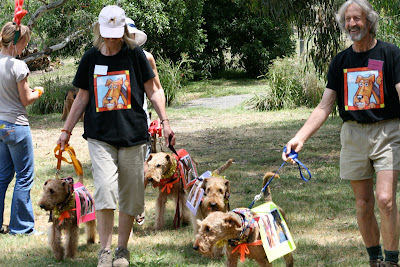 Our pinkie and Max also participated... 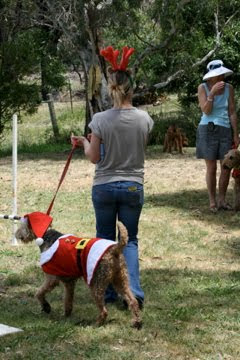 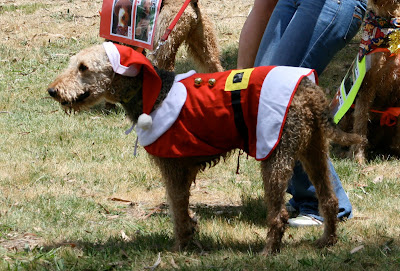 He even won an Airedale hand towel and a fridge magnet. Gosh, our pinkie was proud and couldn't stop saying, "I wish you two would cooperate more", indicating that we should have entered into the competition too. No way!

There was also a calendar fundraiser for Airedale Rescue that our Pinkie had organised... 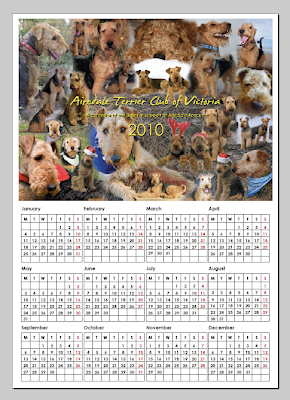 And yes, if you'd like to purchase a copy, please be in touch.

Another gang of pinkies had made some terrific xmas stockings... 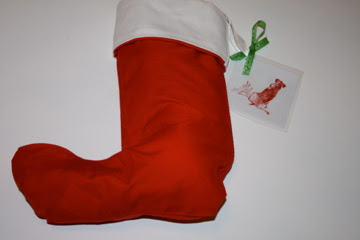 with heaps of treats, toys and bits and pieces in there 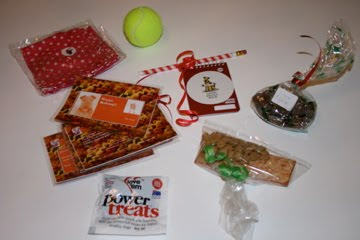 and all of the proceeds going to Airedale Rescue, too.

All up we raised a considerable amount of money so, well done Pinkies & supervising Dales!

We had noshed up all the edible contents of our xmas stockings by the next morning, desperately needing energy! We were simply comatose for a couple of days after, that's how much fun we had!

Gosh, it's an Airedale's life over here so if you ever feel like joining us, come on over! And we promise we'll have all the fun that muppets like us can have together!

The Morning After The Day After...still knackered 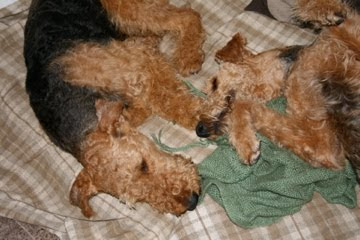 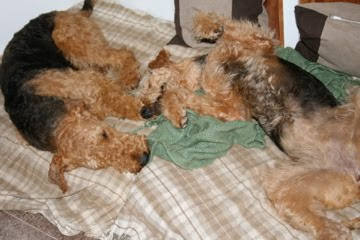 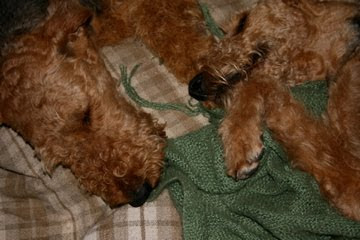 Oh Dog, we are knackered!

We had our annual xmas get-together of ATCV Dales yesterday at Dixons Creek in the Yarra Valley, Victoria, Australia.

There was loads of us and we had soooo much fun mongreling around with fellow black-and-tanians...

We'll rest for now, and will fill you in when we've regained energy...

INKY and MOLLY
Posted by Inky and Molly at 2:09 AM 8 comments: 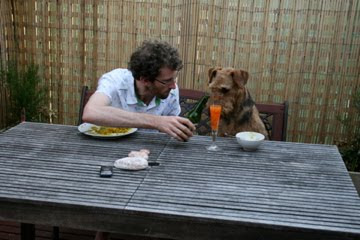 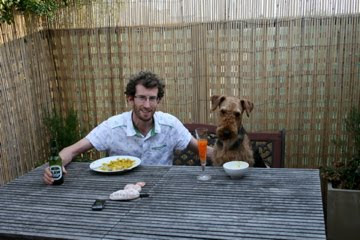 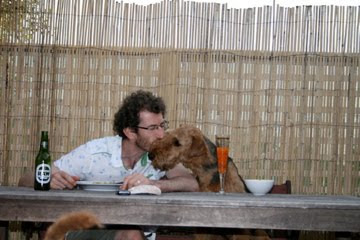 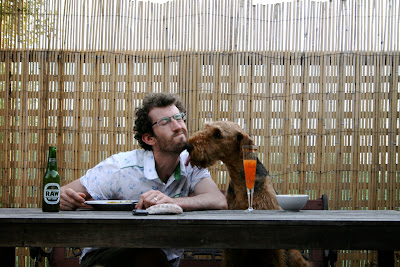 (the last one is biggifiable)
Posted by Inky and Molly at 3:48 PM 19 comments: