Just as I thought it couldn't get any worse...

Hi all. It's Inky here. A BATTERED Inky. 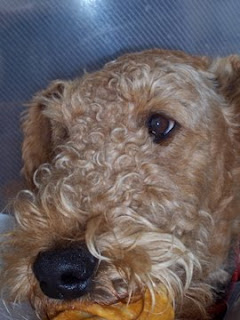 I thought it was bad enough that I can't go to the beach, can't mongrel-around with my sister and friends, can't walk, stand or do anything at all really.

Well, the Gods have thought of one more thing to punish me with...

THE BUCKET, or should I say, THE EVIL BUCKET. 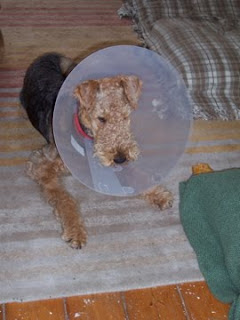 I know that my pal Fozzie had his fair share of the mean treat recently, but I had never thought it would come around to make my life even more miserable than it already is.

Apparently there has been some complications. Has there ever!
Not in regard to the actual new knee (thank the Lord of Puppies, or I don't know what else I would have to endure). It's the other oozy hole in my leg instead. Hooray!

I was told that while I was knocked out (Bastards!) during my "operation" ("torture" would describe it more precisely) they had me pinned up, like a dead insect on some foam core, to keep my leg "in the right position". Well I am glad that my leg was in the right position for my torturers, however, it left me with a nasty infection from the pins they used. Schanks a lot.

And because of that, I have been unable to put pressure on my leg. My little footsie had not touched the ground since before my op and I've quickly gained the nickname Lady Hopsalot. A concerned call to the "the specialist" (an expert in his field of torture) by my pinkies raised alarm that something could have gone terribly wrong so on the morning of day #8 I was rushed back to hospital.

Anyway, it took the vet all of 5 seconds (we travelled there for 1.5hrs) to laugh it off (I am glad someone was amused) and let me go with $150 worth of antibiotics.
"That should clear up the infection which has been preventing her from putting pressure on her leg"....

Now, can you imagine though that an oozy hole in the leg would give you the irrits and that you would want to lick it 24/7??
Well, the solution for that apparently is to put a bucket over ITS head. 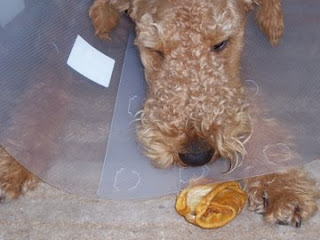 HELLO!! What about my dignity?? And how on earth am I meant to chew treats or rest comfortably or even look around, the last pleasures left to the cripple that I have become??

I sure have been practising THE LOOK of total disapproval... 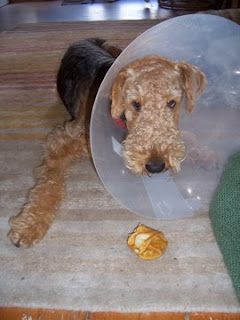 and have been succeeding at getting THEM to feel guilt-ridden enough to take the bucket off on occasions. I quickly sneak in a decent lick of the wound (got to make the most of it), but before I know it, I get yelled at and the bucket is back on. So unfair...

Meanwhile, the oozy hole is still driving me stir crazy!

When will I be able to walk??

INKY
Posted by Inky and Molly at 6:12 PM